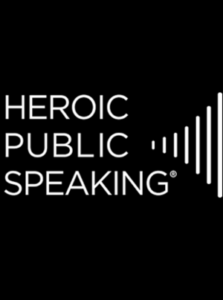 Steal the Show author and Co-Founder/CEO of Heroic Public Speaking. Michael Port weighs in on ways to influence and increase your public speaking value:

There’s an old saying that speakers and writers who work for free—for the “exposure”—can die of exposure. It’s a response to the classic free vs. fee argument that is regularly raised and debated in industries driven by ideas and artistic expression. But I think we’re having the wrong argument.

Instead of focusing on whether or not it’s fair when conference organizers don’t pay their speakers enough, maybe we should talk about what it means to add value so that we’re able to profit from various forms of creative expression.

Contrary to popular belief, the speakers who are paid the most aren’t compensated for their thoughts. They are, instead, compensated for the value they provide and the impact they have on individuals and organizations. What makes this paradigm challenging is that value is often a subjective marker and a moving target.

So, if you’re expecting that your past accomplishments—running a company, climbing a mountain, or competing in the Olympics—are the reason you should be given the stage and for high compensation, you might be surprised to find that it doesn’t always work that way.

Often, new speakers and authors come from other industries with a sense of entitlement: “I have accomplished a lot. Hear me speak!” But they’re trading on the past rather than their ability to provide value in the present in this different medium. Of course, what you’ve done in your past can open some doors, but it doesn’t mean you can deliver on stage when the curtain comes up.

When a meeting planner is considering booking you, they will evaluate you based on these three criteria: Fame, Entertainment, and Expertise. Andrew Davis calls this the FEE model.

FAME: If you’re incredibly famous, your name will put butts in seats. The meeting planner may not care if you’re entertaining or if you have relevant expertise. They’ll still pay big bucks for you to keynote their events.

ENTERTAINMENT: If you’re wonderfully entertaining, but not famous, and you don’t have relevant expertise, you may be hired as the after-dinner performer. But your fee will be nominal (unless your name is Jerry Seinfeld. Then you’ll get seven-figures for a set because you’re about as famous as an entertainer can get.)

EXPERTISE: If you’re not famous or entertaining, but you have expertise in an area relevant to the conference, you may be hired for small breakout sessions, but you won’t be paid top dollar for the speech itself.

However, if you’re not famous but are very entertaining and you’re an expert on a topic that is immediately relevant and applicable to the people in the room, you’ll be paid well–often very well (though probably not Seinfeld dollars).

Assess yourself based on the FEE criteria to determine where you need improvement. Most speakers have a degree of expertise, but few of us are famous and just as few are truly entertaining, no matter what your friends and family tell you.

Of course, fame is a relative concept, so you may be famous in a niche market, raising the value you bring, but that niche fame won’t necessarily transfer to another market.

So, what do we do with all of this? Well, you can get hit with the fame stick and become an overnight celebrity because Oprah dubbed you the next coming of Jesus, but the odds of that happening are slim. Rather, you can work on building a platform by writing books that sell hundreds of thousands or even millions of copies. You can also build a platform through social media and podcasting, etc. Both can be worth the effort, yet both can take time—a lot of time.

What can you do in the meantime to increase your perceived and actual value?

But first, you’ll need to agree that you need to improve in these areas, which is entirely up to you.

Professional speaking is an industry that call on a number of specific skills that require mastery. The better you are at speaking and writing, the more value you provide. Working speakers, such as Alison Levine, Carey Dunai Lohrenz, Ron Tite, Simon Bailey, and Erik Wahl, command higher compensation because they deliver the highest quality work every single time. But most people aren’t putting in the work—work that’s worth paying for.

And compensation isn’t always in dollars, either. Giving a TEDx talk or publishing a think-piece in Medium can bring attention and credibility that can boost your FEE model. Chances are, Mel Robbins’ and Brené Brown’s careers wouldn’t be as stratospheric without their TEDx talks, and Tim Ferriss gives away his advice and thoughts through podcasting to support a bigger platform that brings in millions of dollars. They are proof that if you can provide extreme value, you’ll be rewarded for that value creation.

What scares speakers and authors the most is people thinking they don’t provide value. This can bring shame, and we may lash out at what we think is the source of that shame.  For some, that’s the system—it’s the system’s fault that they aren’t getting the compensation they feel they deserve.

In some cases, the system is broken; most reasonable people would agree that gender and racial inequality runs deep in our industry. We still don’t see enough racial and gender diversity represented on the big stages around the country, because there is systematic and widespread discrimination that enables some people to start on third base and others often feel like they’re not even allowed to play in the game.  As important as finding solutions to these problems are, it’s not my focus for this piece.

Rather, I am proposing that we stop comparing free vs. fee, and instead take a holistic approach to the industry. Consider this: If you were offered an opportunity to speak in front of 1,000 VIPs at the Kennedy Center for free, would you do it? Probably. Or a TED talk? I would think so. But it depends on your goals.

My wife, Amy, and I did talks for TEDxCambridge and a keynote for NSA Influence. We weren’t paid for either, yet they helped us meet our goals of always taking risks and trying new things. They didn’t devalue our ideas. They demonstrated the value we provide not only on the stage, but beyond, too. Though each one-off speech took a good six months of work, both produced a lot of business on the back end.

I’m not trading in ideas. I’m working to provide value.

Publishers, readers, and conference organizers care only about whether or not they get value. If you don’t want to do free speeches, politely turn them down and refer someone who does. Taking on the system and declaring it broken, as though the free gigs ruin it for all of us, is a false narrative, because there are plenty of people who leverage all of their work for consulting contracts, book sales, and other opportunities.

You can’t get the rewards this industry has to offer with ideas alone. Without offering value—as determined by conference organizers and publishers—it’s very difficult to build continuous demand for your speeches and books.

There are so many ways a speaking career can die, but free gigs for exposure isn’t one of them. Instead, I suggest that providing extreme value and designing a smart business model based on signature intellectual property will help you reap all the rewards the industry has to offer.

Michael Port is the Co-Founder and CEO of Heroic Public Speaking. He’s the author of Steal the Show and 6 other books that have been translated into 29 languages and been on the bestseller lists of the NY Times and The Wall Street Journal.